The movie Prometheus came out in June of 2012, and has since then left more people confused than any film has for years. Now if you’re like me, you probably had high expectations of this film. It looked very exciting and action-packed from the trailers, with just a hint of mystery mixed in. After watching the opening scene however, you realize that this film is going to have way more mystery and subtle cues in it than you may have expected. It’s actually designed to take you on a symbolic journey. The truth is the script went under some heavy revising, which caused a lot of loose ends in the final production. But nevertheless, this film is defiantly worth revisiting and learning from its subtle cues. 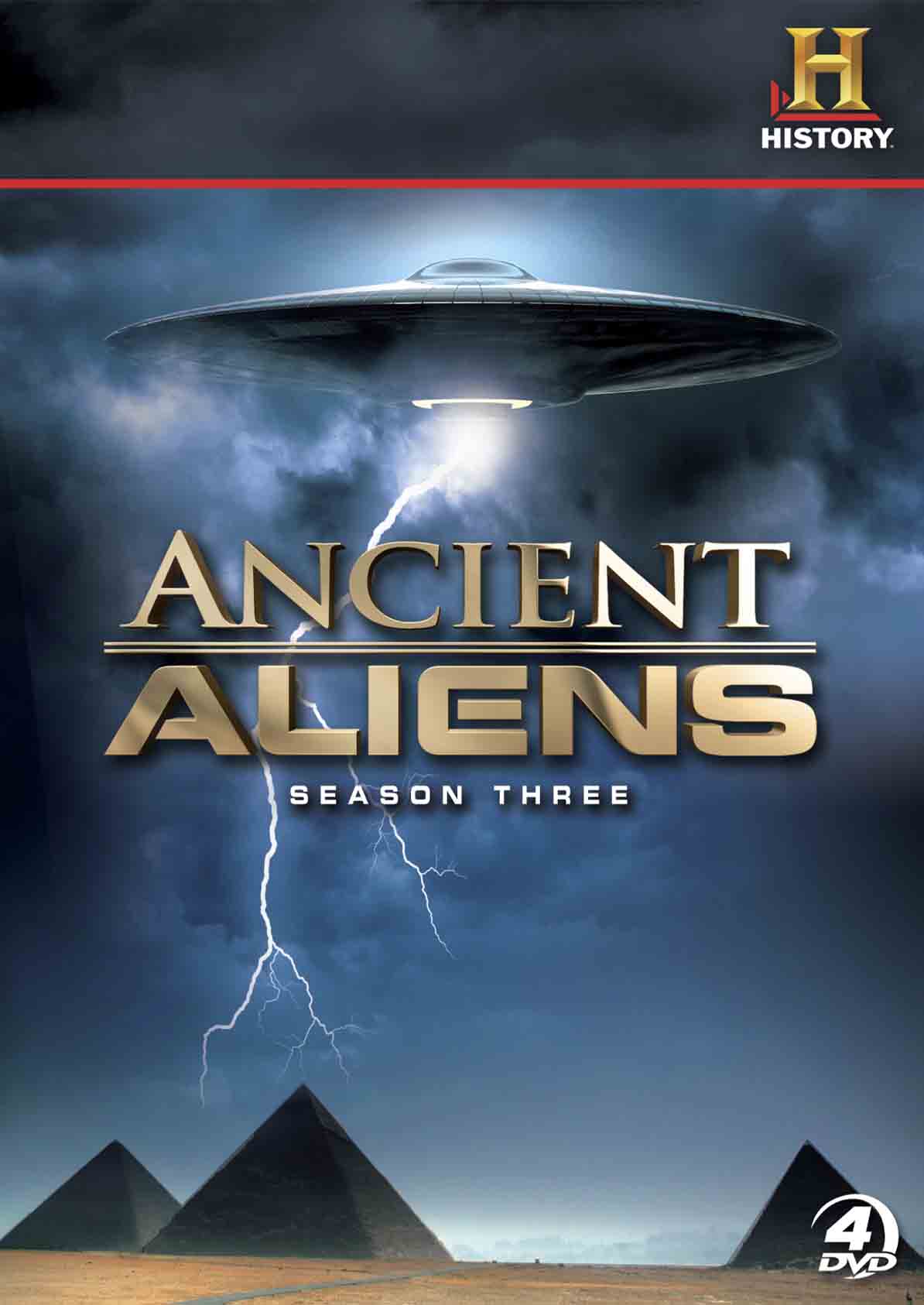 The main story-line of this movie revolves around Dr. Shaw (archaeologists/researcher) discovering the same “star map” repeated in various cultures across the world. She believes this is an invitation for us to go visit another planet, so they board a spaceship in the future and travel to this mystery planet. They believe this planet is home to the aliens/“engineers” that apparently manipulated our DNA creating modern man and even taught ancient civilizations advanced knowledge. The thing is there’s a bit of truth to this story, since ancient artifacts and stories from around the world all tell the same thing… that “angels” or “aliens” or “gods” came down to our planet and taught us about the stars, science, math, and countless other things that today we don’t even understand. This movie begins to make sense when you realize that this script was based off of the book by Erich von Daniken called, “Chariots of the Gods? Unsolved Mysteries of the Past.” Although this film was meant to be a prequel to the whole “Alien” movie series that first started in 1979, Ridley Scoot (the director) was more interested in creating a movie about “ancient alien theory.” This is why the film was so confusing; it tried to be two different films at once. Since it was based on “ancient alien theory,” much of the story is only understood through symbolism and reading in-between the lines, because politically the topics he’s exploring are very controversial. The “alien” star maps are in fact based on a real secret. But you wouldn't understand this unless you did your own research and kept an open mind. This movie can then be a very rewarding experience for you that will make you think and ask some important questions that you may have never thought of before.

The problem with symbolist art (like this movie) is the same with "esoteric" symbolism, and that is unless you already understood the cultural ideas that inspired the work you will be lost. But after researching the meaning behind a lot of the scenes and exploring a number of possible conclusions that people have come up with, I have gained a new profound respect for this movie. This movie dares to ask questions that are considered to be culturally taboo in today's society. The above image of a technologically advanced Rubik’s Cube that's found in the movie perfectly sets the audience up to understand that they're about to be treated with a riddle, just like the opening scene has suggested.

This movie wouldn't have been possible if it wasn't for the discovery of a star map that guided their voyage to a distant planet. In a line from the movie they say, “These are images of archaeological digs all over the Earth. Ancient civilizations that shared no contact and yet the same pictogram showing men worshiping giant beings pointing to the stars was discovered at every last one of them.”

Believe it or not, this is exactly what ancient artifacts suggest in real life. The star map in the movie is actually based off of the real star map of the Pleiades star cluster found in the leg of the Taurus constellation.

In the movie the star map is depicted by 6 stars, and in real life the Pleiades is depicted by either 6 or 7 stars. This is because only 6 of the stars in this cluster are visible to the naked eye, although every ancient civilization knew that there were 7 stars. Legends would usually draw attention to this fact. NASA has confirmed using x-ray imaging that there are 7 stars that are much brighter than the surrounding star clusters.

One of the most overlooked facts was that they landed on this planet on Christmas day. A clear, but subtle reference to the birth of the Son of God, Jesus Christ. Also, the engineer’s base on the planet LV-223 was built approximately 2,000 years ago, coinciding with the birth of Jesus again. And were almost completely wiped out by unknown forces (but likely a bio-weapon they were developing, that they lost control of).

The iconic monolith head found in a ceremonial room within the engineers’ pyramid resembles the Eastern Island figures on Earth. Also it more closely resembles the Olmec head sculptures found in Mesoamerica, which there are at least 17 found already. It’s believed that the monuments represent portraits of powerful individual Olmec rulers. In the movie you get the sense that these engineers may also be artistic and religious. 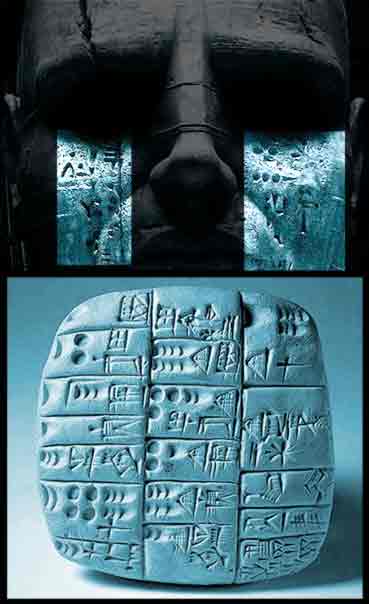 There’s a morphing dome in the ceremonial room, which is symbolic of a gateway to a higher realm.

Aboard the Prometheus ship are chambers meant for sleeping and provide a sort of stais to preserve the body. They are similar in appearance and function an Egyptian tomb and mummification preserving the body, but for the afterlife.

Later Victor (Weyland’s daughter) says, “A king has his reign, and then he dies” because she wants to become the next head of her father’s company. This may be a reference to Egyptian religious beliefs.

The Weyland logo is also inspired by the ancient Egyptian and Sumerian winged-sun symbol. It appears to refer to the Sumerian sun god Shamash, a precursor to the Egyptian sun god Horus (and later identified with Ra).

The engineer’s ship (called the juggernaut) resembles a possible real space ship that NASA caught on video in April 2012. NASA was trying to film the sun, observing solar flares, when this “space ship” was accidentally filmed. The name of the video is called the “Solar Anvil.” It’s predicted to be 3 times the size of our earth and even has a smaller ship (about the size of our moon) docked to the side of it. This also is eerily similar to the bump out on the movie’s engineer’s ship, since the bump out allowed viewers to relate this ship to be the same type of ship as the one in the original Alien movie. Although it’s impossible for the ship to be based off of this footage since the design of this ship’s shape was first seen in the original alien film in 1979. However, the ship’s shape from the movie does seem to be symbolic of an ancient symbol called the Ouroboros. It represents cyclicality, especially in the sense of something constantly re-creating itself and other things perceived as cycles that begin anew as soon as they end. It’s almost as if these space ships were meant to go around re-creating (seeding) life in compatible worlds. 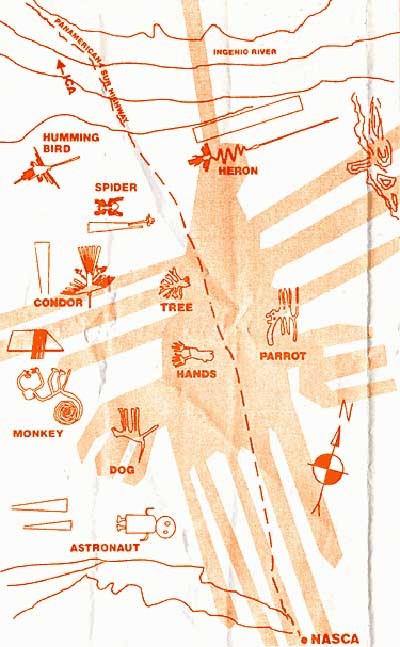 In the movie right before they land their space ship on the strange planet, one of the characters says, “God does not build in straight lines.” This was used as a marking for them to land. This was a reference to the Nazca Lines found in southern Peru. They were designated as a UNESCO World Heritage Site in 1994. Although some local geoglyphs resemble Paracas motifs, scholars believe the Nazca Lines were created by the Nazca culture between 400 and 650 AD. The hundreds of individual figures range in complexity from simple lines to stylized hummingbirds, spiders, monkeys, fish, sharks, orcas, and lizards.

The lines are shallow designs made in the ground by removing the reddish pebbles and uncovering the whitish/grayish ground beneath. Hundreds are simple lines or geometric shapes; more than seventy are designs of animals such as birds, fish, llamas, jaguar, monkey, or human figures. Other designs include shapes such as trees and flowers. The largest figures are over 200 meters (660 ft) across. Scholars differ in interpreting the purpose of the designs, but in general they ascribe religious significance to them. Other theories have been summarized as follows:

"The geometric ones could indicate the flow of water or be connected to rituals to summon water. The spiders, birds, and plants could be fertility symbols. Other possible explanations include: irrigation schemes or giant astronomical calendars.”

Due to the dry, windless, and stable climate of the plateau and its isolation, for the most part the lines have been preserved. Extremely rare changes in weather may temporarily alter the general designs. As of recent years, the lines have been deteriorating due to an increase of squatters inhabiting the lands.

Contrary to the popular belief that the lines and figures can only be seen with the aid of flight, they are visible from atop the surrounding foothills. They were first discovered by the Peruvian archaeologist Toribio Mejia Xesspe, who spotted them when hiking through the foothills in 1927. He discussed them at a conference in Lima in 1939. However, there are still those who believe that the Nazca people created them to be seen by their gods in the sky.

In order to control the engineer’s space ship’s, David had to play a flute to active the ship. It’s a fact that music ties into mathematics. If you remember in high-school geometry, there was an equation you had to remember called the Pythagorean Theorem. A2 + B2 = C2. Many people don’t realize that the Greek mathematician named Pythagoras (whom this equation was named after) was actually a religious figure that created a religion based on numbers. He thought that if you could understand numbers you could understand the mind of god. It was said that Pythagoras could heal the sick by playing the flute.  This ability was based on his theory called the music of the spheres. Basically the sun and planets can be expressed in mathematical ratios, and these spheres produce a specific hum. I know this idea sounds crazy, but consider the things that come out of theoretical physics, like the string theory. This theory basically says that our world is not created by atoms and molecules, but by harmonious strings vibrating in 10 or 11 dimensions (or 26 in the bosonic string theory). This is based on the understanding that everything is pretty much empty space, weather we look at space and can see vast amounts of empty space or look at the smallest atom and see that’s it’s mostly empty as well (as above, so below). In reality, everything (energy) is vibrating so fast and at different frequencies, which is why we can’t walk through walls and they’re perceived as being solid. It’s a fact that our material world is not actually anything more than energy vibrating; we just don’t perceive it that way with our minds. All of this hints towards the idea that these engineers have mastered the ability to manipulate space and time.