How to Assist Your Immune System Against the Coronavirus

How your body reacts 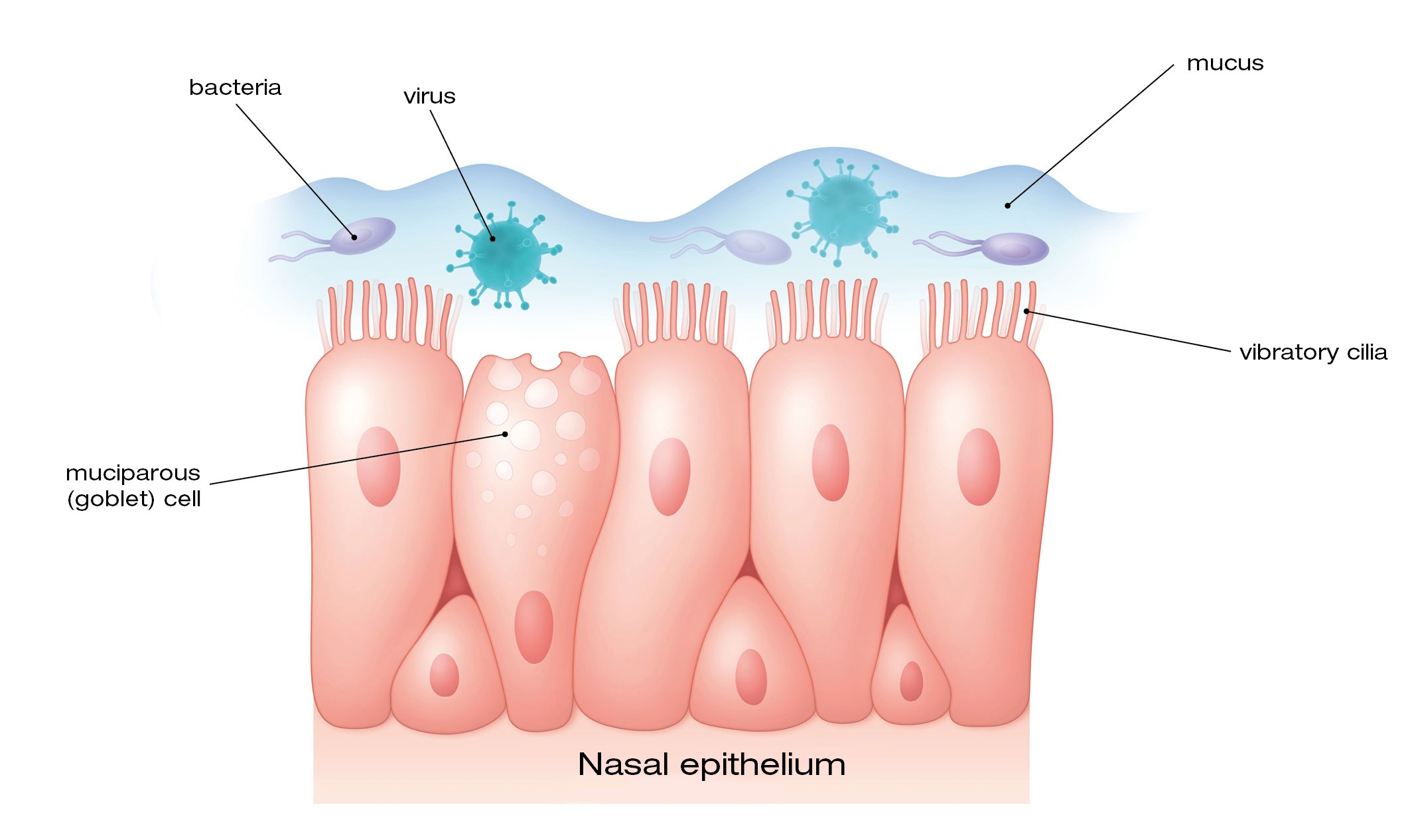 People who catch COVID-19 first begin to produce more mucus, since this is the body’s natural defense to get rid of something foreign like an infection. Ideally, we won’t even realize this is going on if the body can quickly push out the foreign cells while they’re encased in a mucous prison. This represents all the infected people that don’t show symptoms, but could still be spreading the virus.

If the body takes too long then the mucus will begin to harden. This causes us to experience the first symptom of coughing, sometimes followed by chest pain. The body’s goal is for us to cough out the mucus that’s carrying the infection. If the color is other than clear, like white, yellow or green, that’s an indicator that white blood cells have traveled into the mucus to fight either a viral or bacterial infection. Eating unhealthy food that attacks the mucous membrane can also cause this. The darker the color, the worst the fight is. And while stomach acid may kill most bacteria and viruses, when it comes to the coronavirus it’s safer to cough out any phlegm and discard it carefully. This represents about 80% of people infected that experience only mild symptoms, which might last around 2 weeks or less if it’s the coronavirus. It’s important to also mention that it’s the "good" bacteria (probiotics) in us that detects and notifies white blood cells when there’s an infection caught in the mucus.

Now if this doesn’t work, then the infection will have the time it needs to escape from its mucous prison. It’s at this point, when the body’s first line of defense has failed, that we will develop a fever in order to kill the infection. When it comes to the coronavirus, the extra heat can destroy the "spikes" covering the virus. Blood flow will also increase, carrying more white blood cells to the battle. For this reason it’s not a good idea to reduce the fever right away if your body is able to handle it. But definitely check with your healthcare provider for their specific advice for you before any fever can get severe. Which is typically after 3 consecutive days or above 103-104° if you don't already have other health concerns. Taking measures to stay warm and hydrated will allow your body to work less to generate the heat during a fever. This stage represents people that would normally call off from work, or at this time, might admit themselves to the hospital. Following this same logic, you can see why it’s recommended to drink plenty of hot teas and take hot showers or baths while you’re still healthy to keep your blood flowing properly. Regular exercise, stretching, and even spicy food will have a similar effect.

It’s pretty impressive that the body knows to do all of this on its own. But if this second defense doesn’t work then the infection will latch on to the mucous membrane of the lungs, in most cases, and create holes. This membrane is what keeps the organs protected from mucus while it does its job of catching and removing foreign cells like the coronavirus. It’s at this point that a person’s health condition becomes critical, which can last anywhere from 3-6 weeks on average. With some people not making it past the first week. This is known as a pneumonia, which is how most people have been passing away. The lungs begin to fill up with mucus, rendering them unable to get enough oxygen to the bloodstream. Though with some people, other complications may occur. 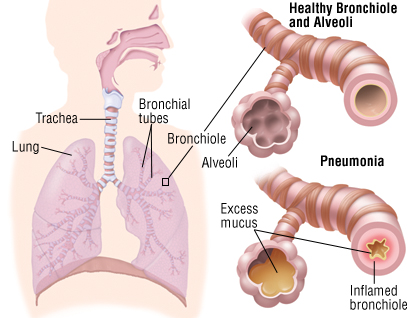 So now what can we do to assist the body’s defense?

Whether you’re feeling great right now and want to keep it that way. Or you’re beginning to come down with symptoms that may or may not be related to the coronavirus.

Number one... stop eating unhealthy food. As obvious as it sounds, this will weaken the mucous membrane. If you went panic-shopping and picked up some undesirable food, then leave that towards the back of your shelf.

Number two... start consuming medicinal food that can do the following:

1.       Keep the mucus loose so we can expel it easily, aka an expectorant

2.       Strengthen the mucous membrane to prevent and repair potential holes, aka a demulcent

3.       Weaken the outer lipid envelope of viruses, aka something that also lowers cholesterol

4.       Prevent the virus from replicating, aka an antiviral

5.     Increase the "good" bacteria population in your body so they can notify your white blood cells of any infection, aka probiotics

This can be achieved by improving your immune system with ascorbic acid, aka Vitamin C powder and eating apples every day. No, I’m just kidding…

It’s going to come from the following herbs. Oh and by the way, Vitamin C powder is extracted from cornstarch using sulfuric acid. There’s nothing natural about it, and actually causes more harm than good over the long term.

Now onto the natural herbs: 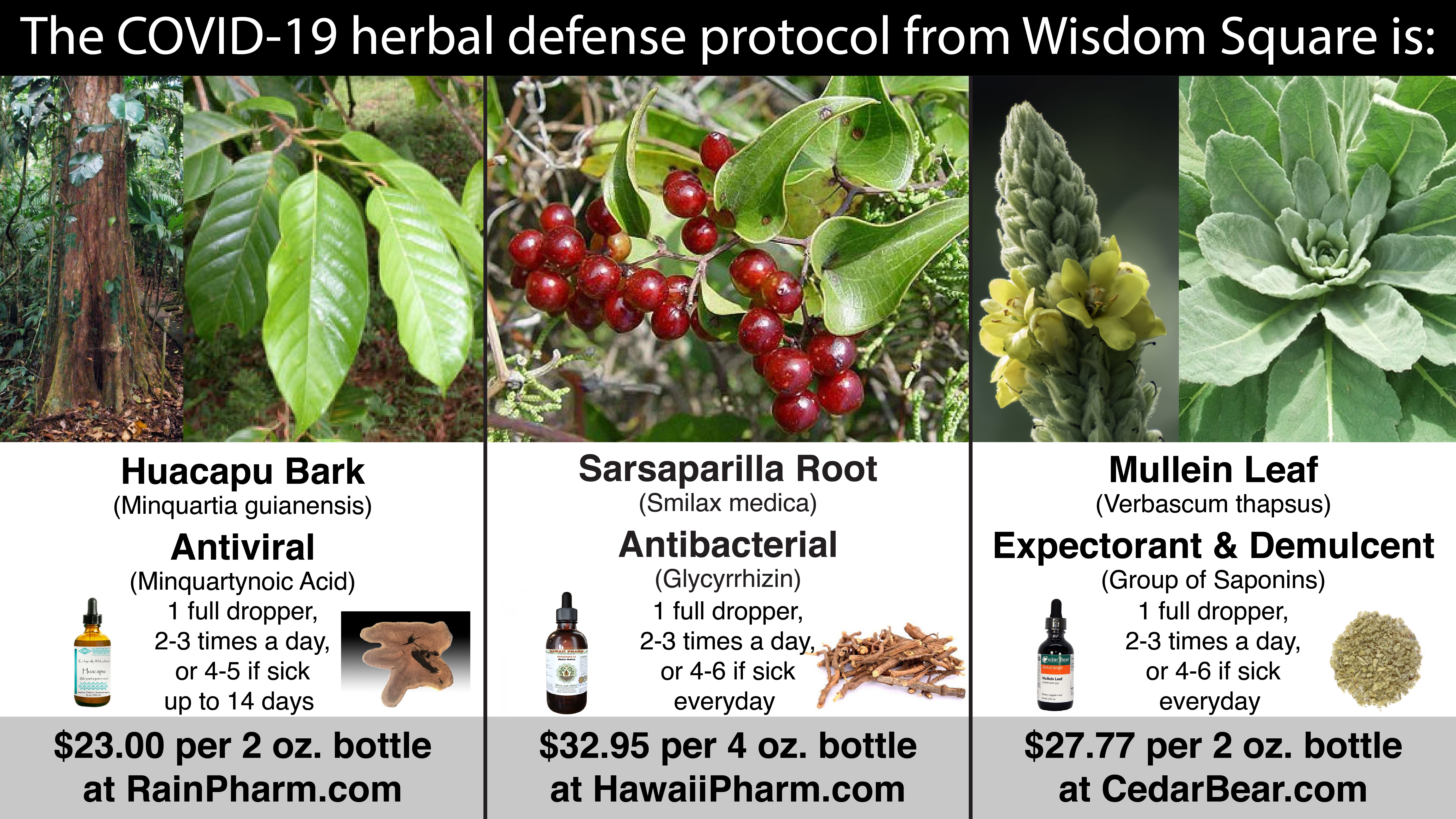 1.   Mullein Leaf. This contains a group of saponins, which has both expectorant and demulcent properties. Personally I’ve taken almost 100 different herbs and this one by far has created  the most immediate and noticeable improvement with my breathing. I would know since I grew up with asthma.

2. Sarsaparilla Root. This contains the saponin Glycyrrhizin. This acts as nature’s soap, which creates a foam that can break the virus’s lipid envelope, exposing its RNA. The RNA is like the brain, carrying the genetic information for the virus to replicate.

3. Huacapu Bark. This contains the antiviral Minquartynoic Acid. This can destroy the RNA found within the cell of the coronavirus. 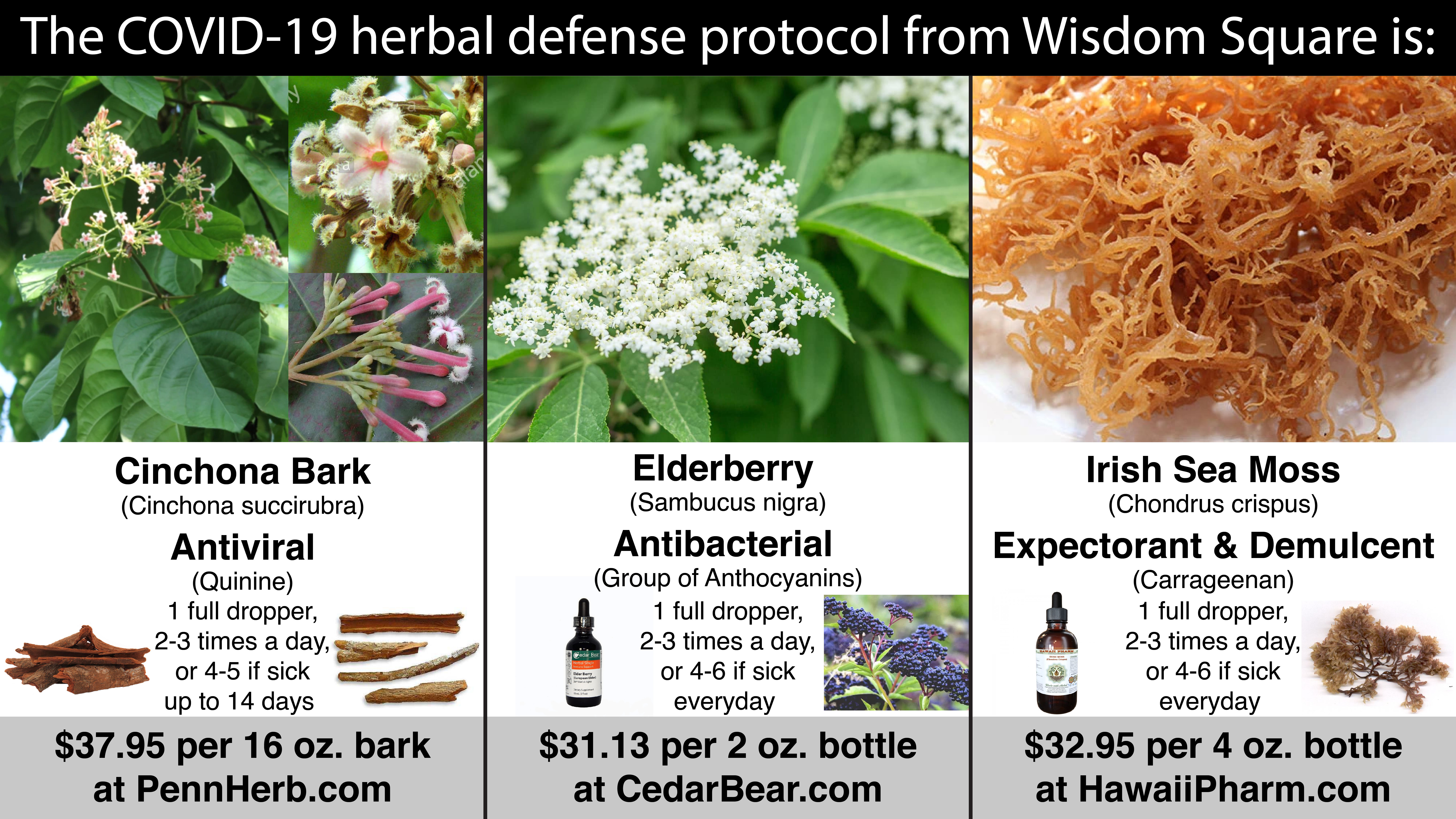 4. Irish Sea Moss. This contains Carrageenan, which acts as both an expectorant and demulcent. Just in case you want extra support along with the Mullein Leaf.

5. Elderberry. This contains a group of Anthocyanins (responsible for the deep purple color of the berries) which not only targets low-density lipoprotein (LDL / bad) cholesterol in the blood, but also weakens the lipid envelope of a virus. As well as providing protection against potential bacterial complications.

6. Cinchona Bark. This contains the famous antiviral alkaloid, Quinine. Due to its effectiveness in treating malaria, a book was written for it called "The Miraculous Fever Tree." More recently it's been making headlines around the world because of a particular pharmaceutical drug that's derived from it. This drug has recently shown great potential against the coronavirus, though study groups have been small up until this point. 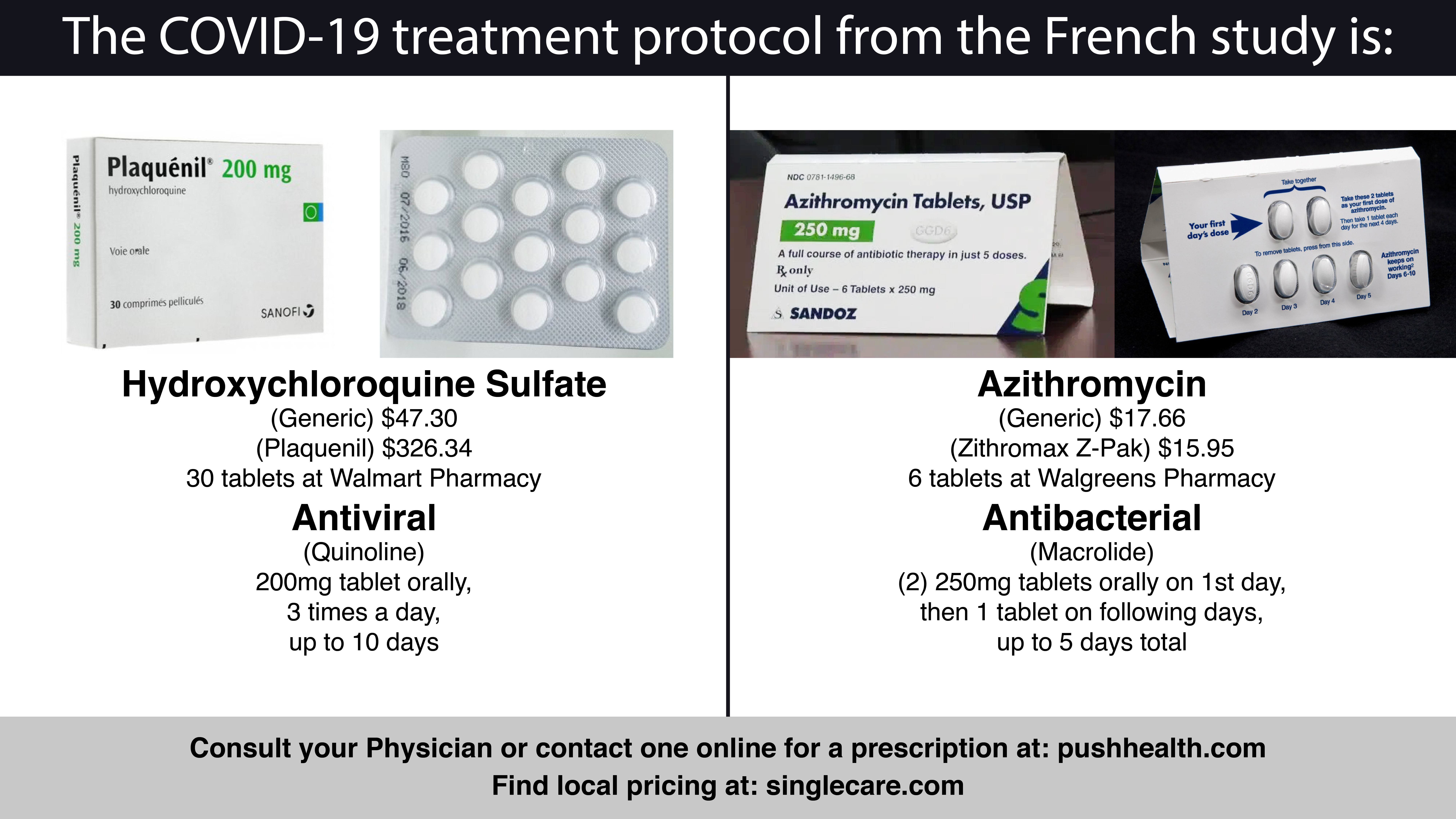 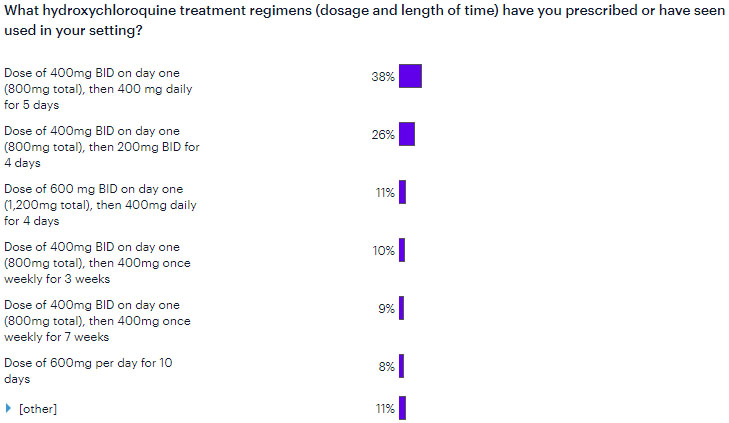 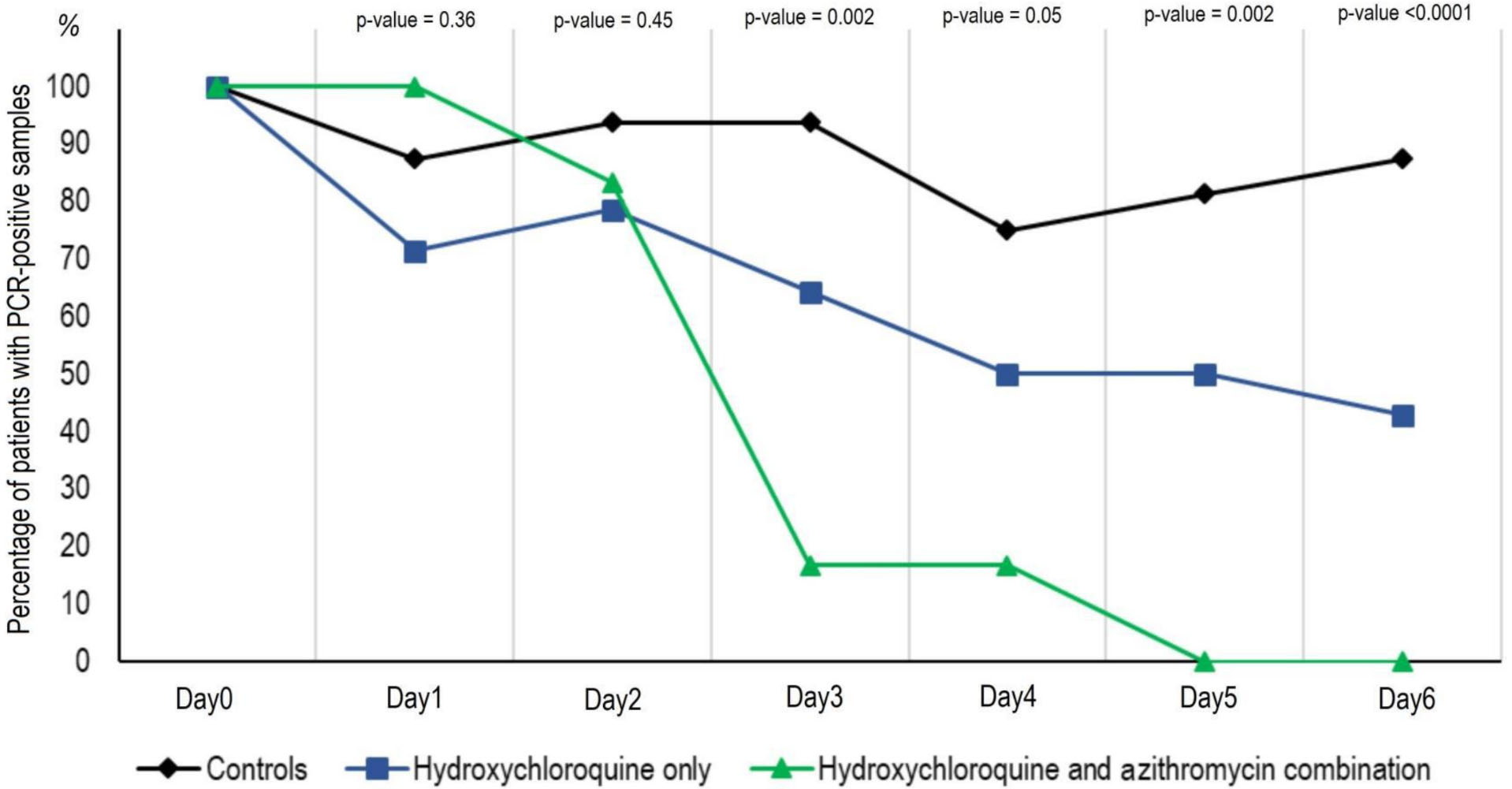 In this study, 20 "COVID-19" patients were treated with the antiviral Hydroxychloroquine, 6 of which with the addition of the antibiotic Azithromycin. As shown in the graph above, by the 5th day those patients that were treated with both pharmaceutical drugs no longer showed symptoms or traces of the virus in nasopharyngeal swabs. This is significant because the immune system will take an average of 20 days to fight off COVID-19 symptoms, according to a recent study in China.

Just about everyone is confused why an antibiotic can help, when it's known they are only effective against bacteria. The reason is because antibiotics also weaken the lipid envelope of a virus. They just don't have the ability to stop the inner RNA from replicating. This is why it's paired with an antiviral that can. Though we should be wary of pharmaceutical antibiotics, because they kill all good and bad bacteria equally. Whereas an antibacterial plant will only target the bad bacteria.

Headlines for this "drug cocktail" are partly due to president Trump praising the potential of Hydroxychloroquine Sulfate, which is different from the deadly fish tank cleaner Chloroquine Phosphate. Also the famous actor Daniel Dae Kim added his name to the list of anecdotal recoveries. Upon noticing his temperature rising he consulted with Dr. Paul Song, who wrote his prescription. Just keep in mind that this medication isn't for everyone, because of potential side effects. 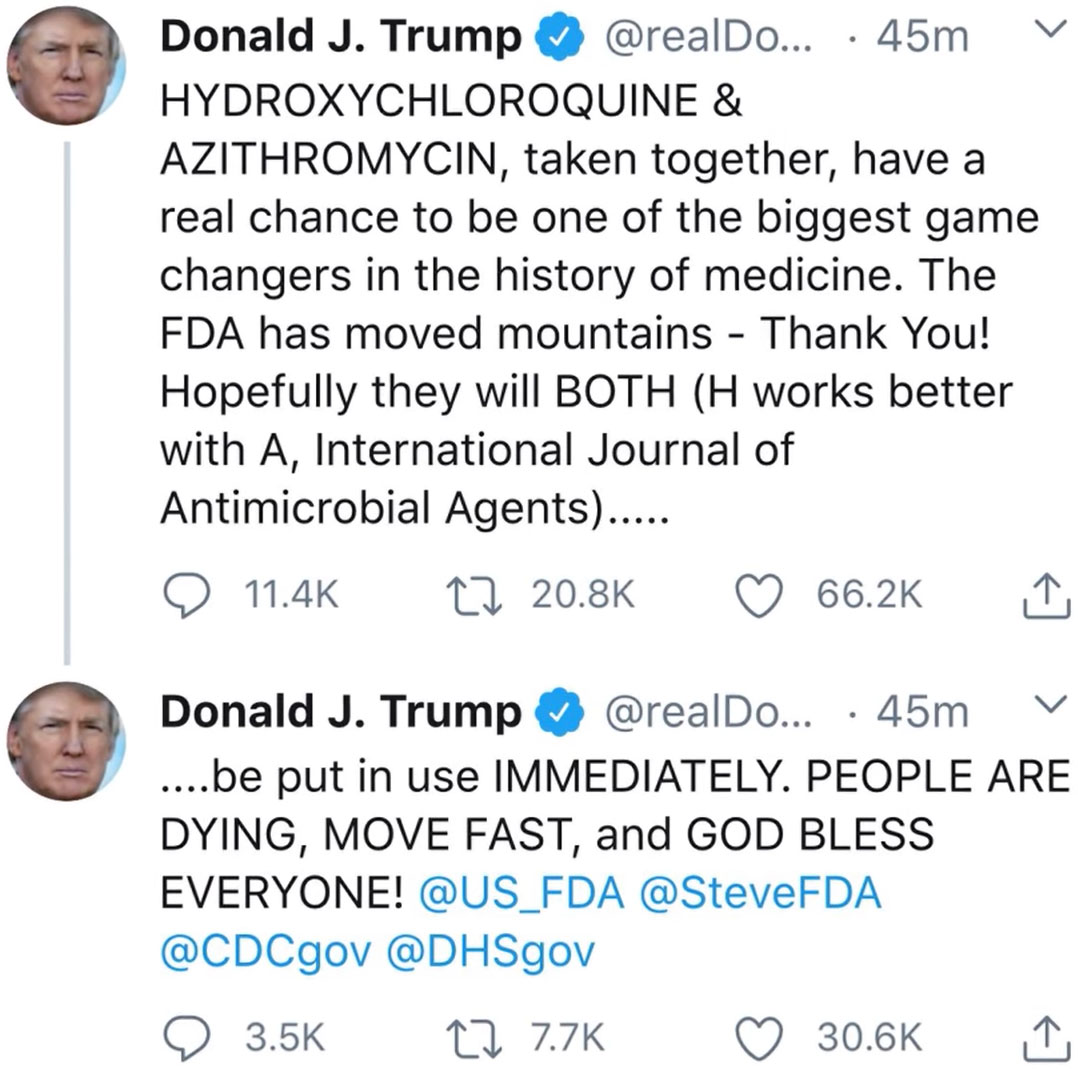 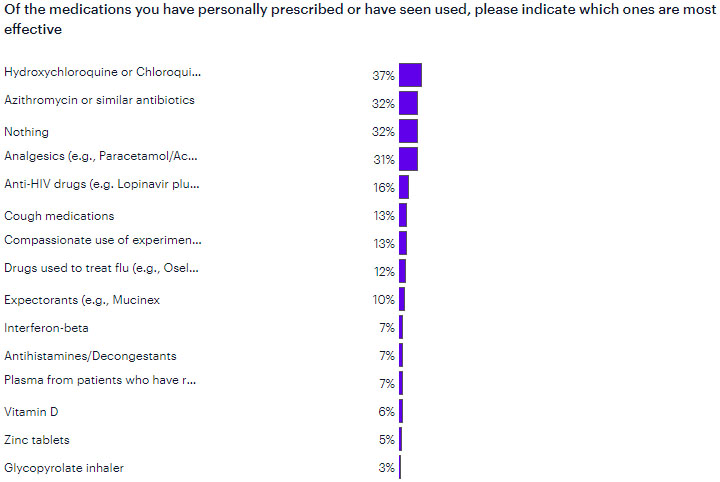 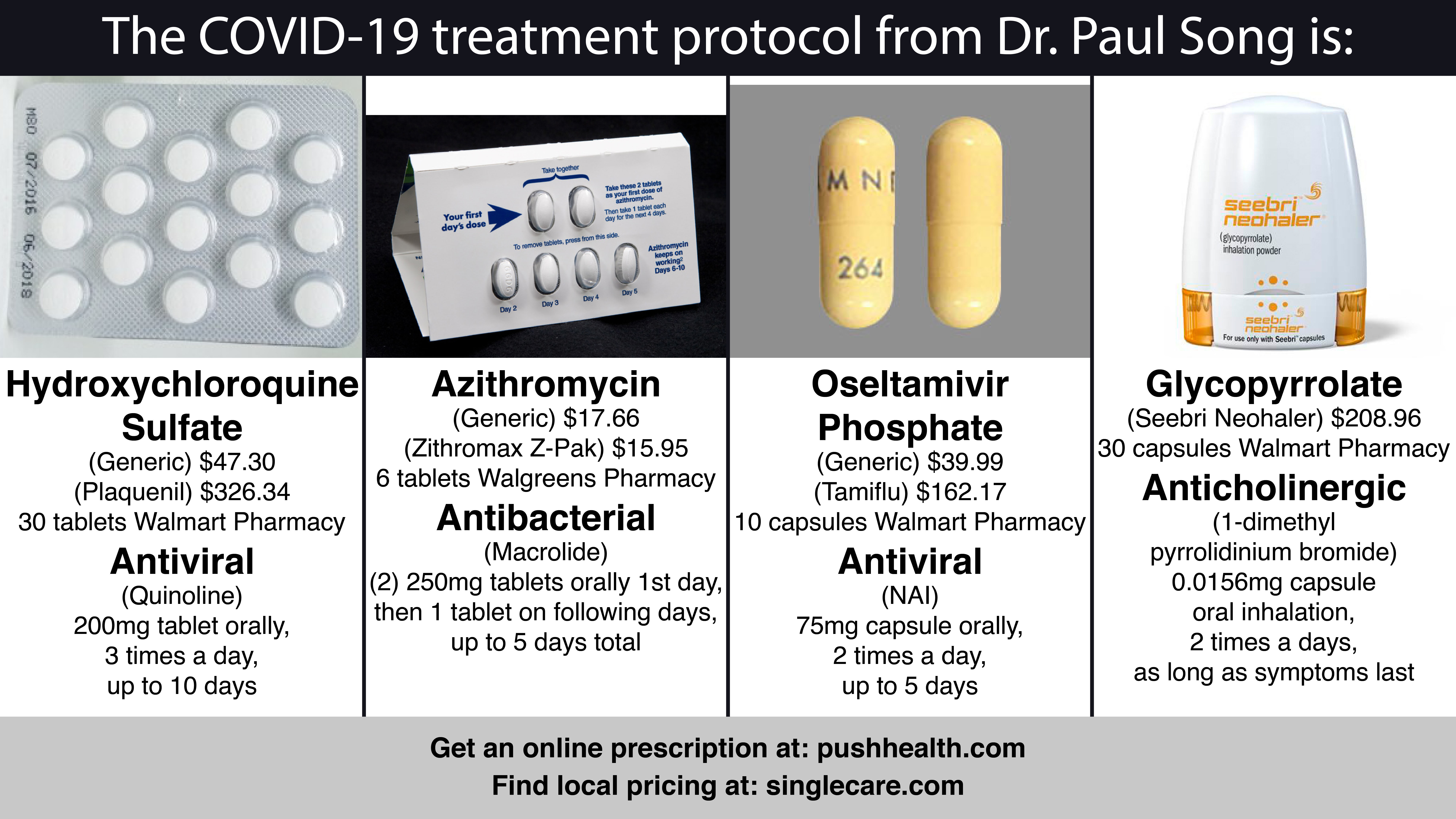 When you isolate / concentrate any component from a plant, such as Quinine, it has the potential to become more dangerous than when it's working in harmony with all the other phytonutrients. The truth is we aren't able to identify everything within a plant, let alone fully understand their interactions with each other. Despite this, the quest for proprietary treatment runs rampant across the world.

Also, the dose makes the poison. Which is why the biggest thing under debate now is how much of these pharmaceutical drugs should be taken. The goal is to maximize effectiveness against the novel coronavirus, while minimising potential side effects. Which can include abnormal blood flow affecting the heart or eyesight when overdosed.

Patients in the French study were not allowed to receive this treatment if they had a known allergy to hydroxychloroquine / chloroquine, retinopathy, G6PD deficiency, QT prolongation, breastfeeding or pregnant, to name a few.

Nature, on the other hand, has this thing called taste that lets you know on average how much you should consume. If it's bitter, it's medicinal. And a small amount goes a long way before you end up poisoning yourself. Which is hard to do when you can again taste the medicine. Unlike with flavorless concentrated pharmaceutical drugs.

And as for America's official recommended treatment: 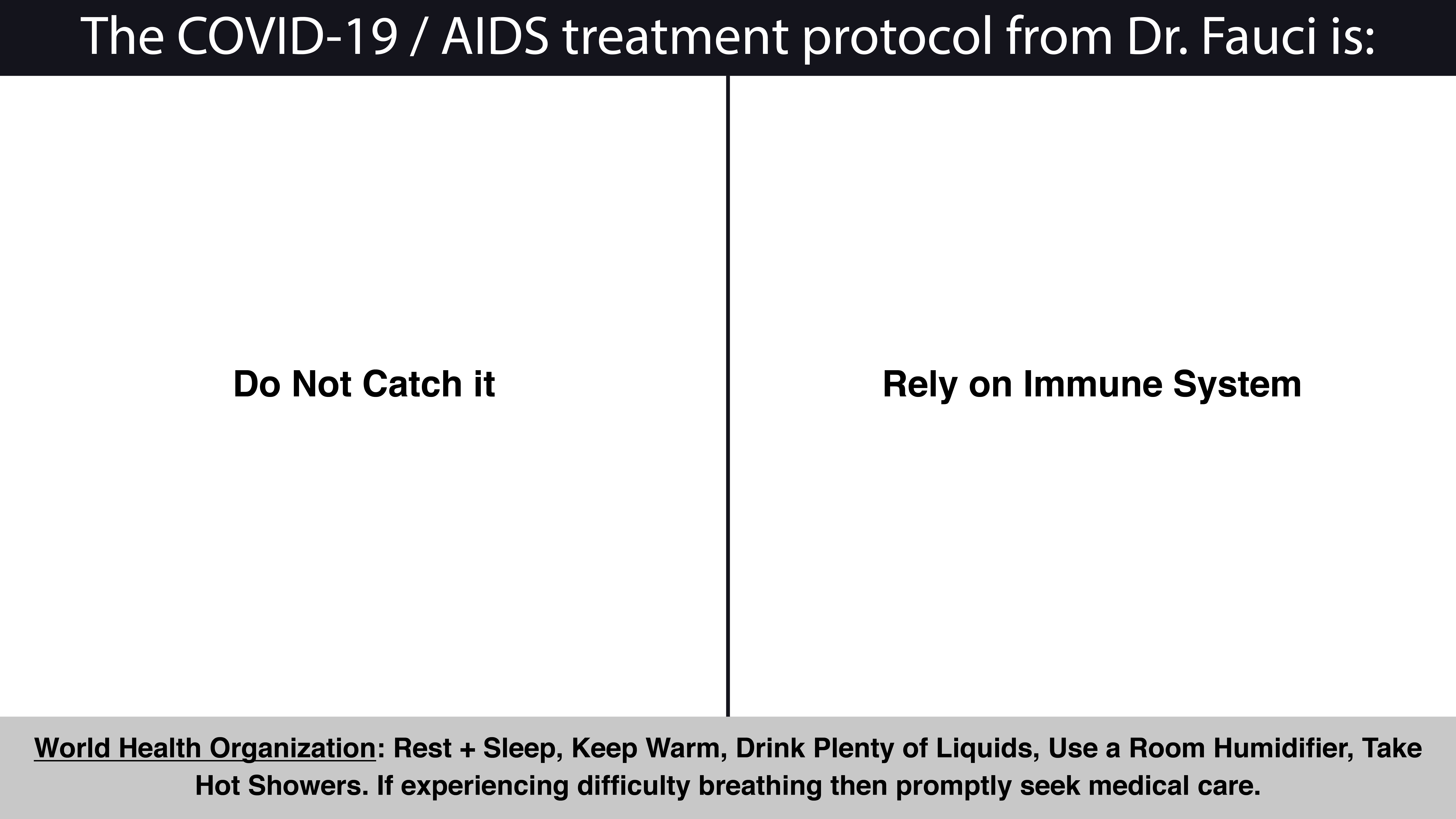 One thing is for sure, Dr. Anthony Fauci is not going to get sued anytime soon. In fact, he's had the same approach towards the AIDS virus for almost 40 years, since the Reagan administration. "The nation's leading expert on infectious diseases," according to The New York Times.

We're told that it usually takes around 6 years of research before a new antiviral drug is allowed for medical use with the general public. Even though Ribavirin (antiviral for Hepatitis C) took 1 year to get patented, 16 years to get approved for medical use, and 32 years to get approved by the FDA. Despite being considered by the World Health Organization as one of the safest and most effective medicines available. 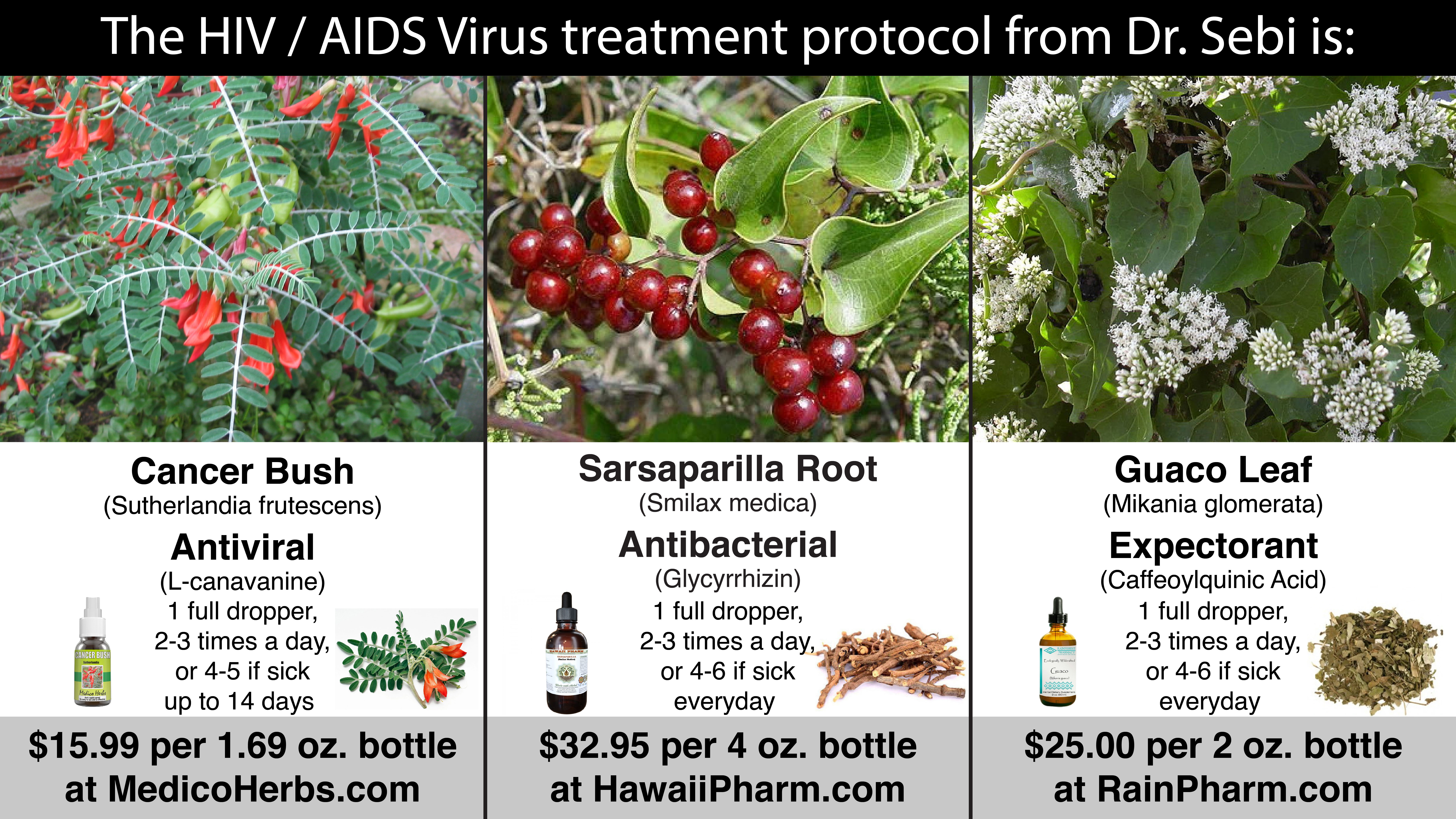 To view evidence for the effectiveness of this treatment in the form of before and after diagnostic test results, look towards the end of the book titled: "Seven Days in Usha Village."

It's important to note Dr. Sebi's philosophy was also inspired by Arnold Ehret. 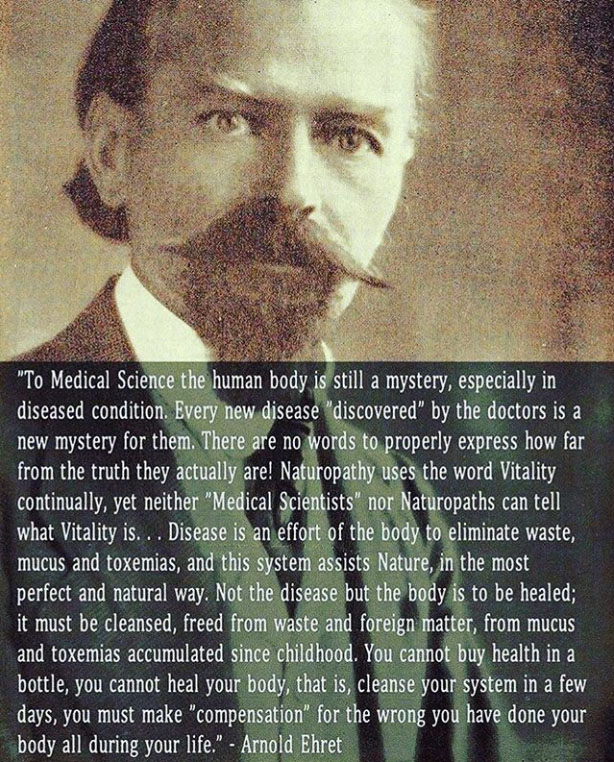 All of the above products provide the probiotics your immune system needs. If you grow a garden outdoors and eat the raw leaves off of a plant, then that's another way to get good bacteria.

One tip when it comes to Kombucha (fermented black tea + cane sugar) and Jun (fermented green tea + honey) is to let them sit at room temperature with the lid partially open for a few hours to allow the sugar to continue to ferment. Once they taste sour, they're ready to drink.

Be sure you're also feeding your stomach healthy prebiotics, in other words insoluble fiber, from whole food. That's the food source to keep these bacteria alive. Since just about everything we eat will provide this, I'll just give one healthy recommendation for avocados. 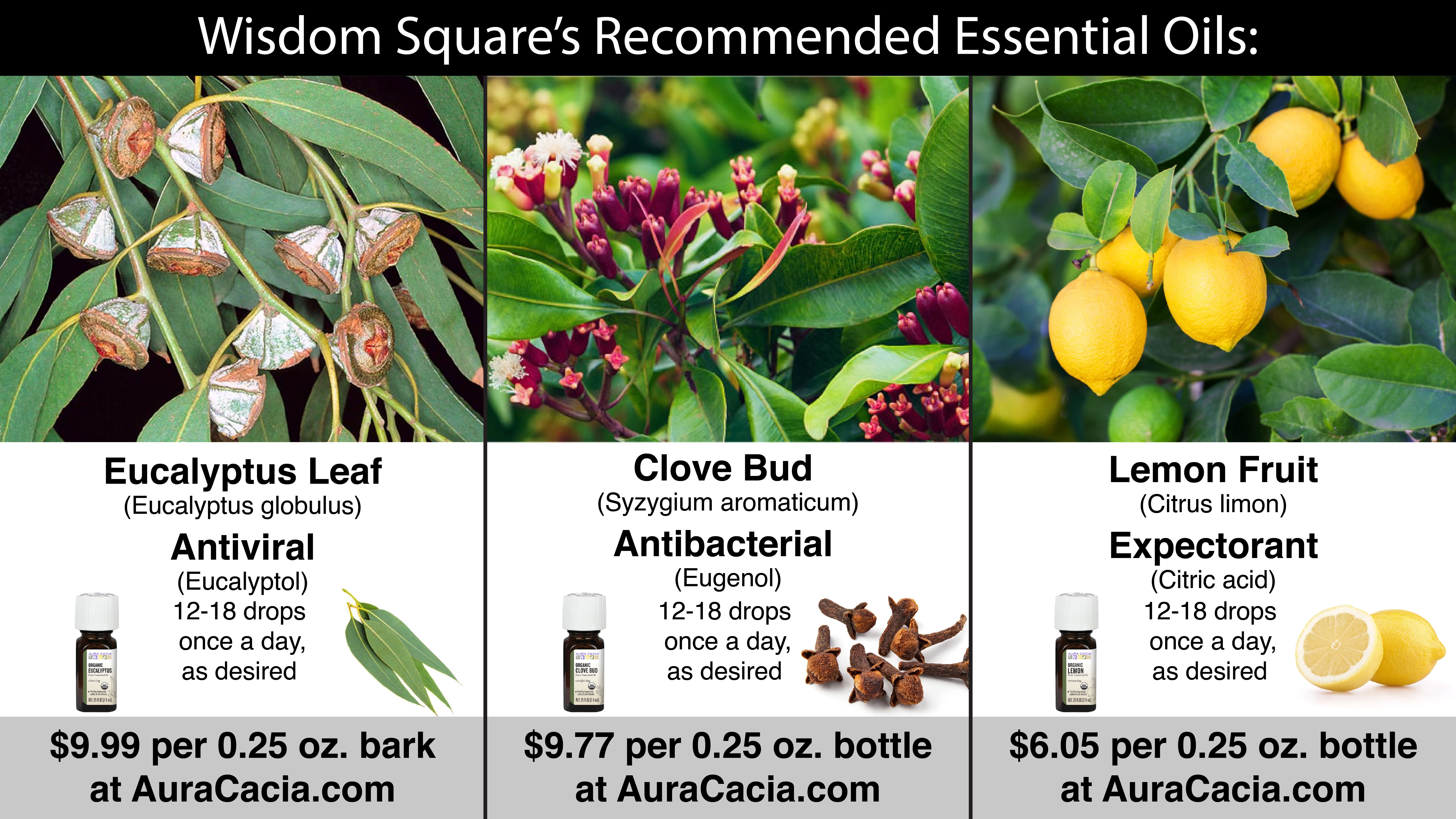 Be sure to pick up the organic version of these essential oils, since they do smell very different from the non-organic ones. So despite the increase in cost, they are worth it.

Aside from adding them to hot bath water, here are three other methods: 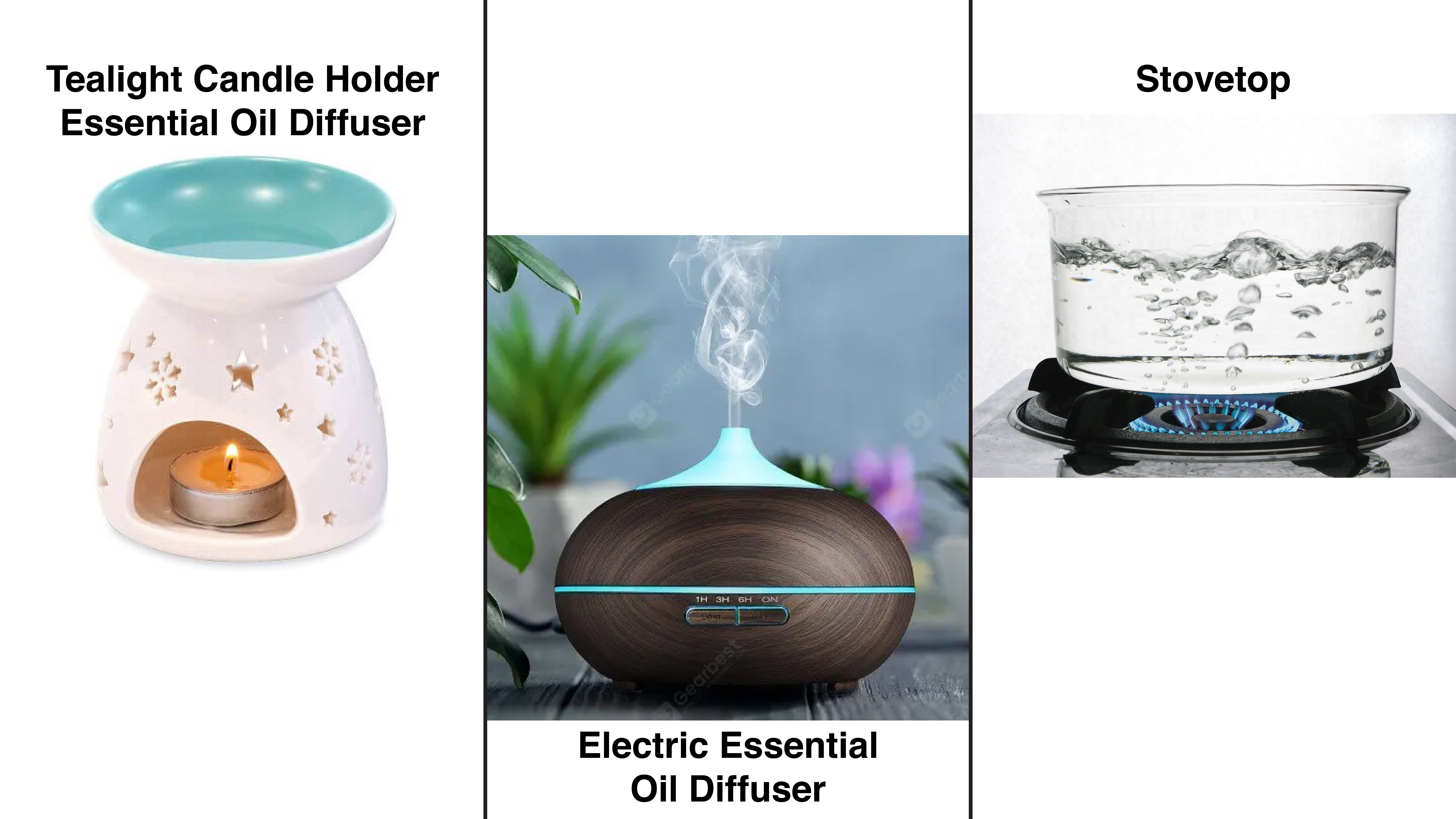 My intent behind writing this article was to create awareness, because I firmly believe panic and fear can only prevail where there is ignorance. If all of us unite and follow these guidelines we can throw this virus out of our communities and set an example for the rest of the world.

Share this article if you've found it to be helpful.

Coming up next will be the 21 herbs that hospitals in China have been giving to their medical staff and patients during this outbreak. Something the media in America has deemed unimportant to mention.

To get access and stay in touch, enter your email below: