How the Federal Reserve Works

Wisdom-Square › Follow The Money › How the Federal Reserve Works

When banks run out of money to loan people, where do they get their money from? That’s simple; they get it from the Federal Reserve… so where do they get their money from? They simply print more money, but the thing is they alone control how much is printed. The United States Mint prints our money, but the Federal Reserve has all the power and control over how much money is printed and when. In other words, they ultimately control our economy and inflation rates… the more money in circulation, the less it’s worth. No American citizen, no duly elected member of our congress, not the Supreme Court, not the Justice Department, C.I.A., D.I.A, F.B.I., A.T.F., or any media is allowed in the Federal Reserve. Why is this? Because the Federal Reserve is a PRIVATE BANK owned by PRIVATE STOCK HOLDERS, that’s right… they are not owned or controlled in any way, shape, or form by the United States Government. These “private stock holders” are the ones that ultimately determine how well our economy is doing, whether that new big screen TV you want is going to be $200 or $2,000. So don’t let the name “Federal” fool you, think “Federal Express” as most people realize they have no ties to the government being they’re a private organization just the same.

But then how does the Federal Reserve earn money if all they do is print money and give it to the banks to make loans with? That’s the thing, the banks aren’t given the money… they are loaned the money. They have to pay it back with interest, no different from what we have to do when we take a loan from the bank.

Now look at it this way, if you decided to print some money… what would happen? I’m sure that you wouldn’t be able to sit at a computer and be able to read this article right now. So if it’s unconstitutional for us to print money, how on earth did a group of people get together, decide to open their own private bank… and then obtain the power to control our National Treasury (whom originally had all the control and power) so that they could print money? See that’s exactly what happened, the Federal Reserve did not exist when our country was founded… but instead was created December 23, 1913… 137 years after our country was founded. Notice how every dollar bill says the words “Federal Reserve Note” on it, that’s their money… not our government’s money. What’s the difference you ask? If the money we use was our government’s money, we wouldn’t owe this private bank (named the Federal Reserve) $10.4 trillion (69 percent of GDP taken at the end of 2011). By the way, this is predicted to grow to $20.8 trillion (87 percent of GDP) at the end of 2021. Who do you think is paying this back? You guessed it, through our taxes, that continue to grow, our government is forced to take it out of your hard earned pay check. Now is this all sinking in? A large portion of our taxes goes directly to these private bankers to pay back our government’s debt. Didn’t expect to hear that did you? 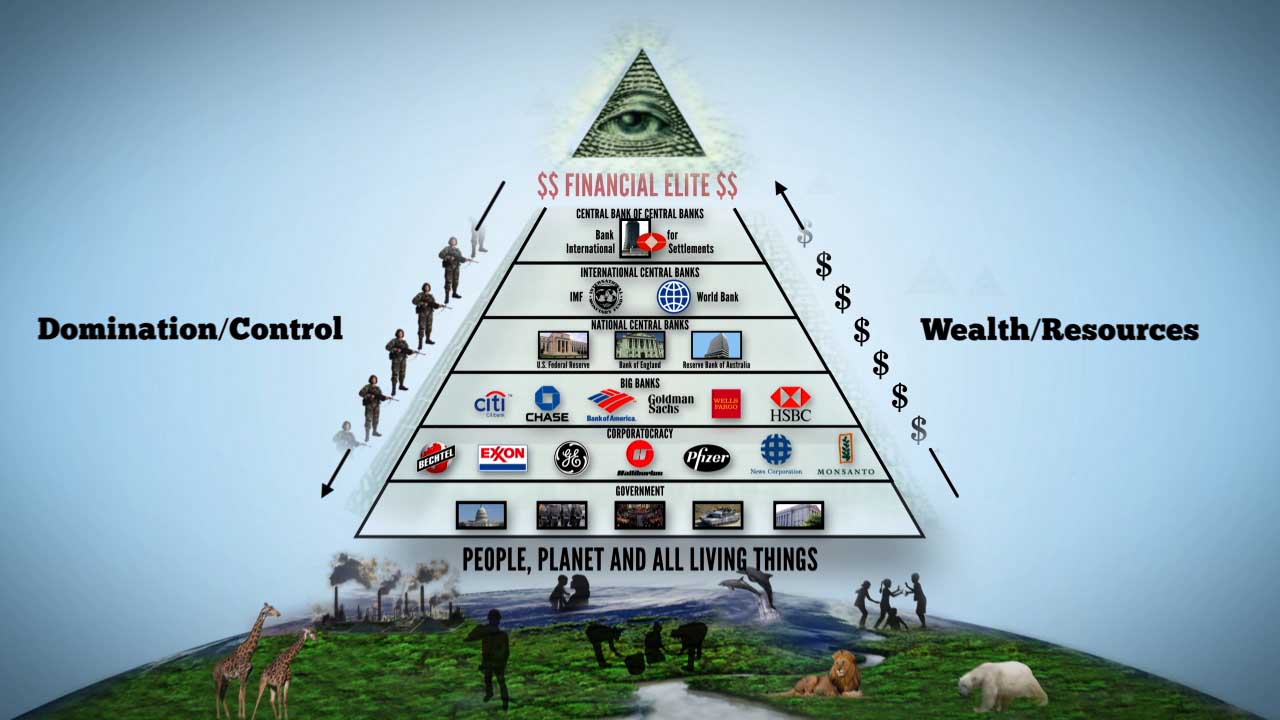 The Federal Reserve prints the money, loans it to our government, charges interest to our government, and then our government has to tax us more to pay for it. The greatest invention (or crime) in the history of mankind, sounds like something straight out of a movie doesn’t it. And yet, this is the way things are today.

Although, the people behind the Federal Reserve may seem very smart to be able to pull this off, and to be honest they are, all they did was look at history and duplicate a concept of banking that existed a long time ago but on a much larger scale (why reinvent the wheel, when it already exists). Something called “fractional reserve” is the concept they copied. You may remember the term if you ever took an economics class, too bad they didn’t teach you this stuff there though.

See this began when people would barter… trading things we had for things we wanted. The problem was what if I wanted something, but I didn’t have anything you wanted to trade with me for it. So I could have wanted to trade my corn for your mule, but you didn’t want any more corn although that was all I had to trade. Now how was I supposed to get the mule I wanted? You can see the problem now. Then came the day when everyone agreed that gold could replace this bartering system, since everyone wanted gold. People would trade the items they wanted by using gold as a tender. This system worked out great, problem solved. But, now it became a problem keeping your gold safe from getting stolen… not to mention how hard it is to carry around a bunch of gold since it’s so heavy. So banks first started up by appealing to this problem, they had vaults that you could place your money in until you needed to use it. You didn’t have to worry about it getting stolen, and would receive a piece of paper as an I.O.U. Sounds good, problem solved again. Now stores began to get greedy and would slowly raise their prices… instead of one I.O.U. paper slip it would cost ten I.O.U. paper slips for the same item. Inflation was invented since no one could control how much value something ought to be. In turn, you would have to work harder to make less. Now I don’t know about you, but somehow this just doesn’t seem fair.

Unfortunately, the stores weren’t the only ones who got greedy… the banks at first only earned money by charging a small fee to keep your money safe. But after a while the owners of these banks thought of an even better way to make money… that’s when the greatest idea (or scheme) was invented … that’s right, they created the concept of fractional reserve. In case you forgot what that means, it’s simply an idea that banks should only be required to keep a certain percentage of your money in their vaults at all times (as of 2006 the average reserve requirement was 10% for United States’ Commercial Banks). So you give your money to be safely kept in a bank, and the bank then loans that same money out to someone else (without asking for your permission or you even realizing it sometimes). So if everyone were to go to the bank at the same time and request their money back, what do you think would happen? It’s not there. Funny how differently people can feel about the same thing, just depends on what you choose to call it. Fractional reserve or stealing your money… what do you prefer?

Granted the likelihood of everyone going to withdraw their money at the same time is very unlikely. These people were without a doubt very smart. They turned worthless paper into gold and made a LOT of money (through interest) by lending out your money… all when you thought they just kept it safe in a vault. By essentially becoming the middle man, they created enormous amounts of profit by literally doing no type of physical labor whatsoever. Talk about working smart, and not hard. Can’t get better than that, people will always think we “need” more than what we already have. All banks do is take advantage of this, and provide us with what we want fast and easy. It was a win-win situation, until the banks charged far too much in interest than was possible to pay back. Now image doing this on a very large scale and even creating debt for every single nation. Seems impossible to pull something like this off at that level? Click here to learn how it happened… it’s incredible what we are capable when we put our minds together.

Wisdom-Square › Follow The Money › How the Federal Reserve Works